In 1954, an unremarkable event happened in Bow, London within the sound of Bow bells. David, was born I guess that makes me a Cockney. It was snowing the day of my birth, and it was also snowing on my 64th birthday.

I am a Piscean ,whatever that means and a famous actor born on the same day was Ron Howard”,Happy Days.” This is my mother and I,  and I think this is my earliest photo of us together .In the background you can see an Anderson Shelter and I think a Prefab which was post war. 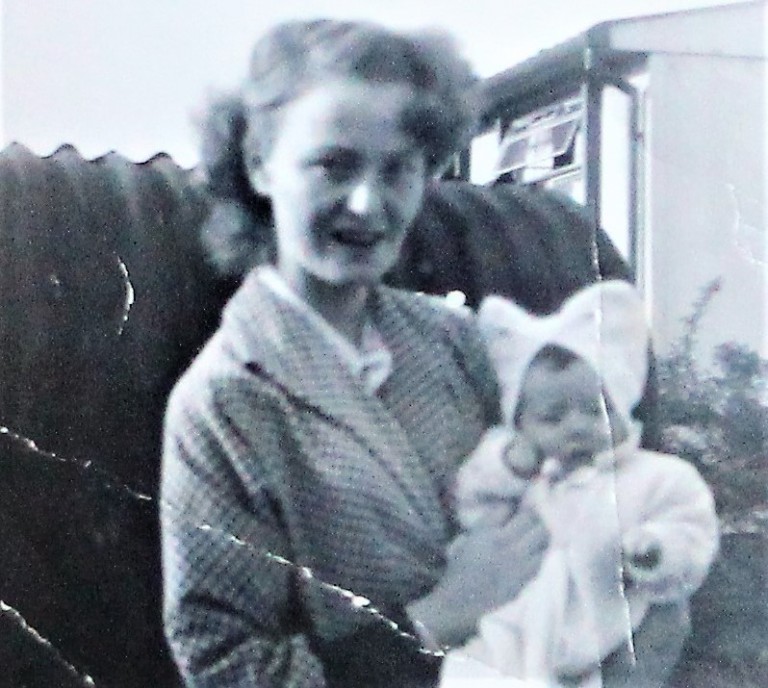 Another early picture was taken by a professional photographer (Griffiths ), London. Always been a bit of a hippy ,long hair ,which I was told I was born with.I was originally called Anthony but nurses called me David because of St Davids day. It stuck. 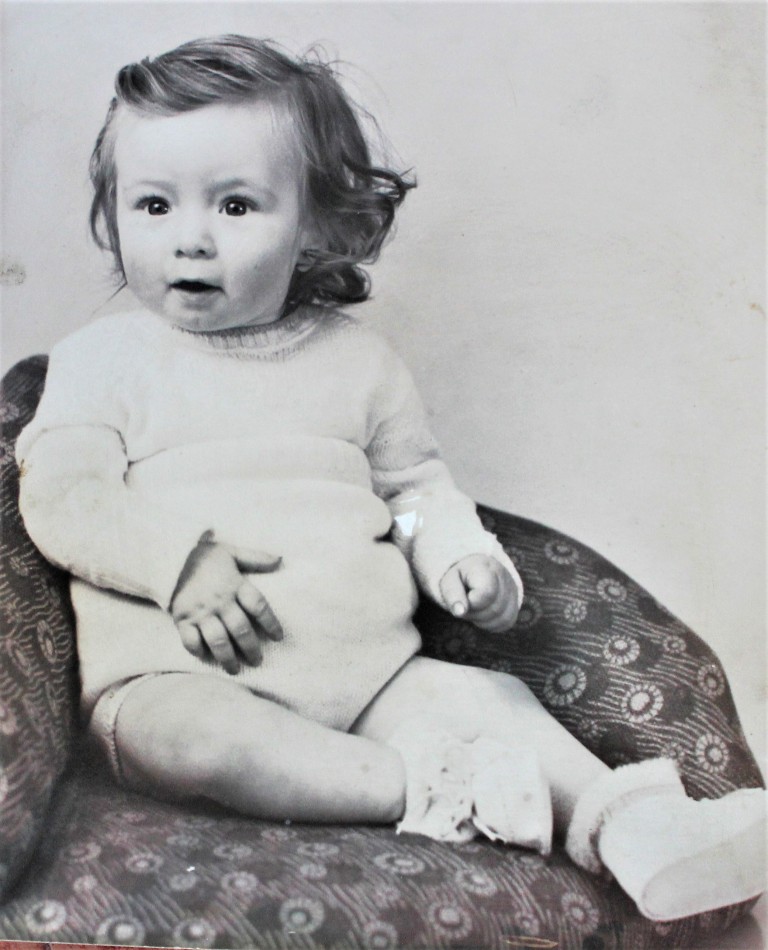 My Dad served in the army while mum was evacuated for a while during the war.I don’t have wedding pictures but they made a handsome couple in smog filled London. 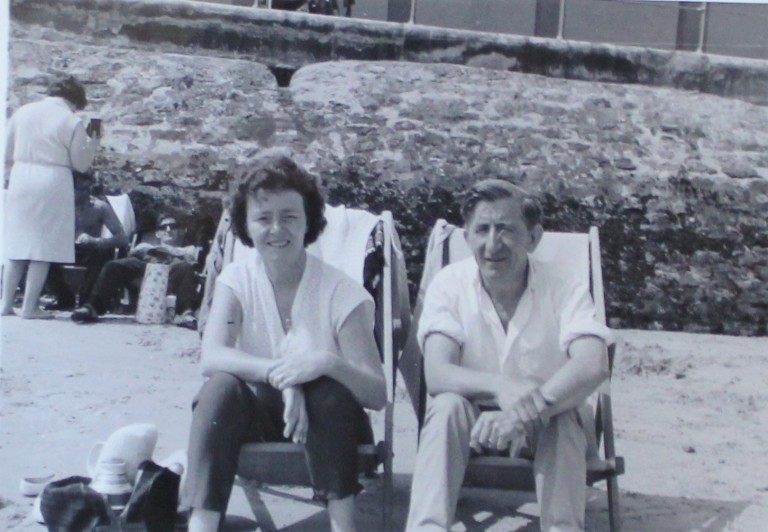 Dad in the Army apparently they were good times 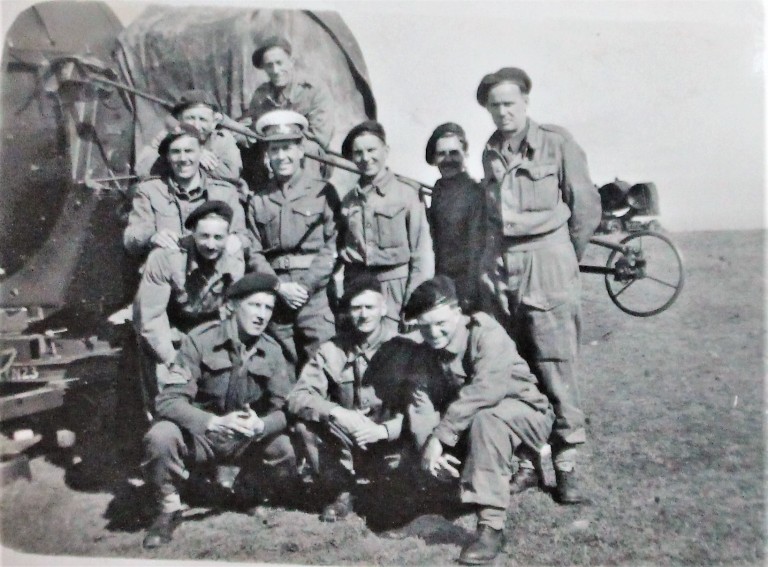 Soon after I was born we moved to Basildon,it really was the country.We moved to a two bedroom house . It had a garden with apple trees and a green to the front ,the Sunday school was a short walk across the green.

Mum and Dad made friends with the Arnold family. Linda and Janet were their childrens name.I remember to they had a motocycle and sidecar which was very exciting and had a ride on occasions 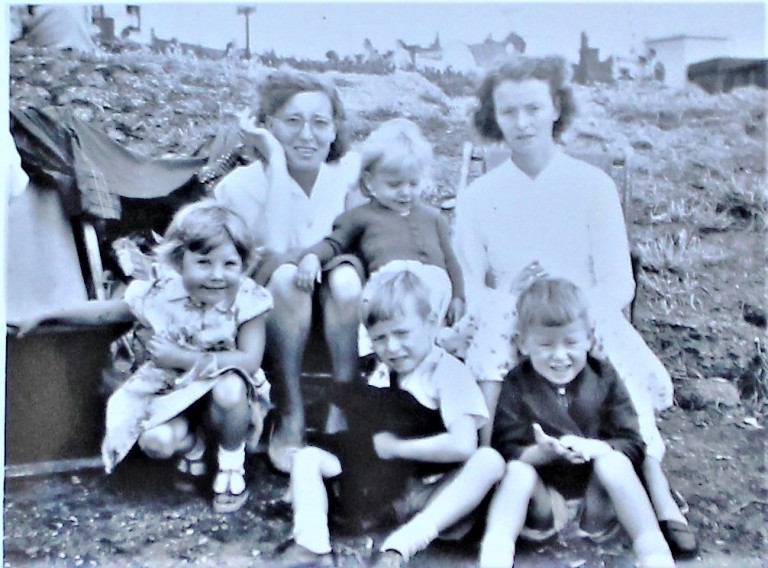 My mum and the Arnold girls and their mum .They loved a Fag.

I remember a happy childhood at this age .I remember Sunday School,playing on the green outside our house,the forest at the top of the hill where you imagined wolves looking down at you .You wouldn’t go up the hill after dark.We made catapults, bows and arrows and mudslingers.Arrow heads and spears were nails tied to the end of sticks and we had sheaf knives and pen knives.My best friend at that time was Derby Stone who lived in a big house off timberlog lane.I wonder what happened to him?

My first school in the infants had tall Conker trees and the Wendy house,in which we were allowed to play as a treat. A park was next to the school and remember the “Parkie” who broke up minor squabbles.

I remember running away from home after a friend told his mum I weeeed on his head from the garage roof.”Wait till your dad gets home “she said ,it was dad who found me sent to bed with no tea .Mum soon came up to the bedroom with food .My dad never ever hit me.Dad always made me fight my own battles and took me around to another boys house to fight him after I came home crying.I lost but myself respect remained intact.

My infant school is not a real memory for me and when we moved to Nether Priors I went to Fairhouse.

In Mid Colne, we had floods to contend with and remember being told to stay upstairs.I remember getting chicken pox and measles in that house..Sitting on dads lap picking the solder off his work clothes.Favorite meal was neck of lamb stew and my favorite sweet ,or afters as we called it was jelly and ice cream.

This memory is totally self indulgent and is not a finished article. 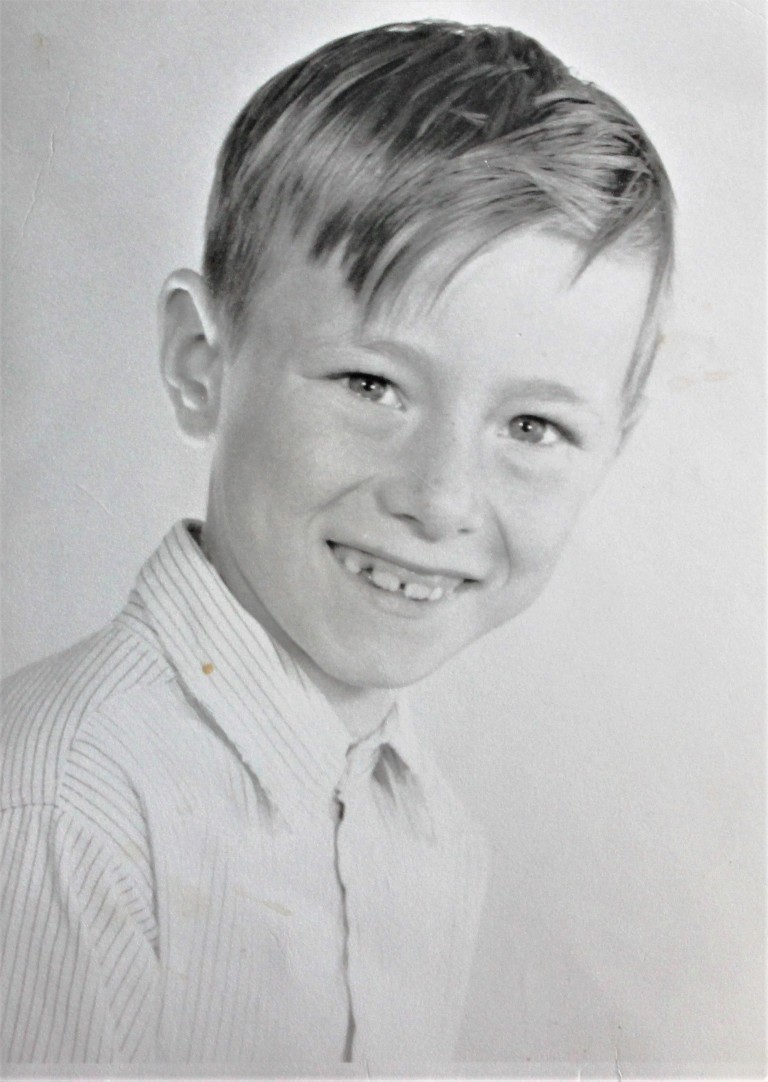 Next time the 1960s too young for sex and drugs.David